ConDoor Door Solutions was founded in 1997 and is headquartered in Zeewolde, the Netherlands. In Europe, ConDoor is a leading producer of insulated overhead doors for industrial and residential buildings.

In three production locations in the Netherlands and Hungary, every day approximately 450 people work on the development and production of tailor-made doors that completely satisfy the end user’s wishes.

The company sells its products throughout Europe via a large network of independent dealers in more than 40 countries.

Over the years we developed a solid partnership with the ConDoor team, based upon trust, transparency and expertise. Together we are working on technical solutions that help ConDoor be best in class in their industry.

ConDoor offers a wide range of doors with customized dimensions for every door size. Each door consists of multiple components where a profile plays one of the key roles. A door profile refers to the joint where the sticking and panel come together. Profile machinery alongside with processes around its usage are the main subjects of modernization in this project.

Traditionally, such profile machines are operated manually: a factory worker would receive an order, configure, start, monitor, control and report on the execution process. In this way, errors would happen since people always make mistakes. The first challenge was to remove the human factor from the manufacturing process of a door profile.

Taking into account that there are multiple profile machines at Condor, it was an operational burden to execute such manufacturing process controlled by the corresponding to machines amount of workers. The challenge here was making costs less at the same time producing more profiles.

A profile machine was operated manually, jobs were configured according to previously printed out sheets. The challenge here was to remove printed forms out of the profile manufacturing process and make profile machine listen to production orders orchestrated by the central system digitally.

Another challenge which Condor wanted to solve is optimal scheduling. It was rather difficult for a worker to determine the best order to achieve maximum speed and efficiency and required departments to negotiate who does what and when. The responsibility was with the worker and often led to a far from ideal processing where the whole door assembly process might queue up waiting for necessary profiles.

Having transparent operations is one of the core values for ConDoor, that is why the challenge of having real-time monitoring was placed on the table and had to be answered in the course of this project.

No impact on local hardware

ConDoor wasn’t ready to invest further into their local hardware and the challenge to build software which would not impact available hardware capacity had laid on our shoulders.

The previous challenge was further constrained with the requirement to be able to produce profiles with internet connection being offline for up to one week.

Synadia made it possible to integrate profile machines with the existing factory management software running in ConDoor’s private cloud. This project takes the necessary step in bringing ConDoor closer to AWS cloud as Synadia used AWS serverless building blocks and launched the software in Ireland region. Synadia’s software plays an intermediary role between ConDoor private cloud and manufacturing factory in Emmen allowing machines to operate without connectivity to both clouds for up to a week.

ConDoor already chose AWS last year that is why it was already known that all necessary building blocks for this project are available, the need to search for an alternative in another place was not even discussed.

The AWS cloud was ideal for this challenge since it has offered nearly out of the box an easy way to securely register and remotely manage, organize, monitor IoT devices in which Synadia had to turn profile machines. 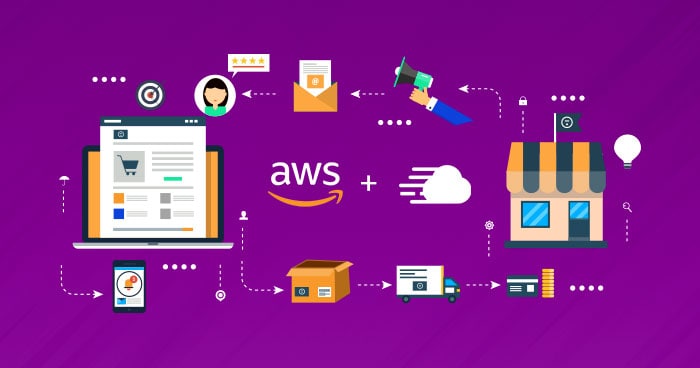 Additionally, inexpensive compute and storage, ability to back up resources easily, native support for infrastructure as Code confirmed once again that AWS has everything that is needed for almost any challenge.

We chose Amazon Web Services because it enabled us to achieve what we wanted without deeply investing further into our local hardware.

ConDoor and Synadia are good old partners, please refer to the “Bending machine” and “Smart Factory software” case studies which will reveal all necessary details which depict the history of our previous relationship and cooperation.  It was an absolute pleasure for Synadia to further help when ConDoor addressed Synadia with a new set of complex challenges to be solved for profile machines. 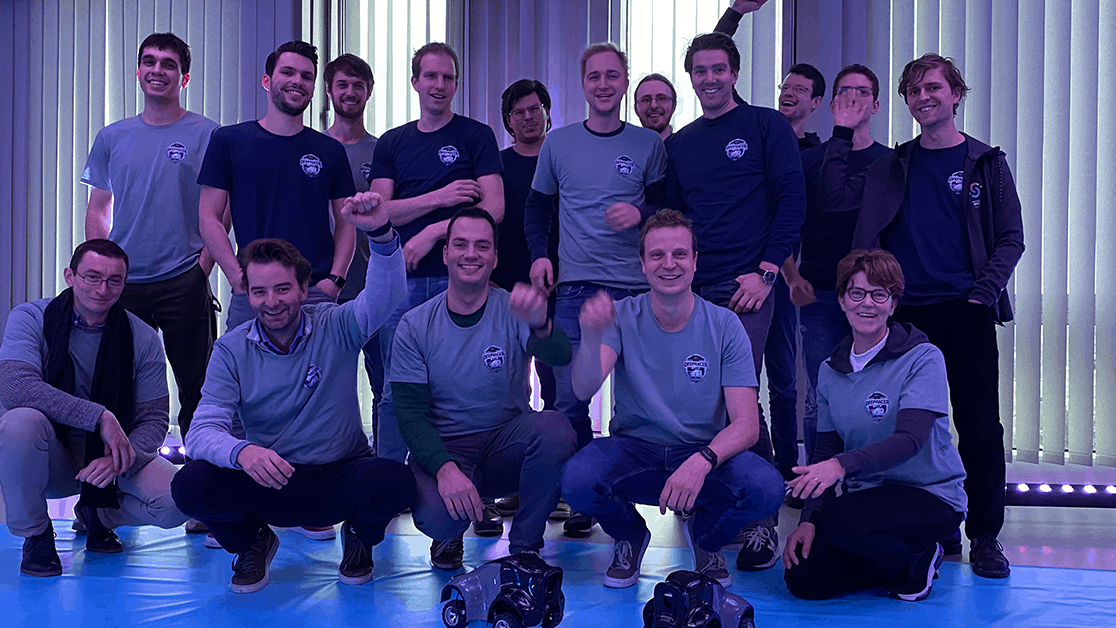 The main contributing factors were:

Discover the solution created by Synadia

Synadia advised ConDoor on new hardware for the next generation of profile machines and helped to make it smart by linking it to serverless cloud software which they developed. Very simplified the high-level architecture looks following: 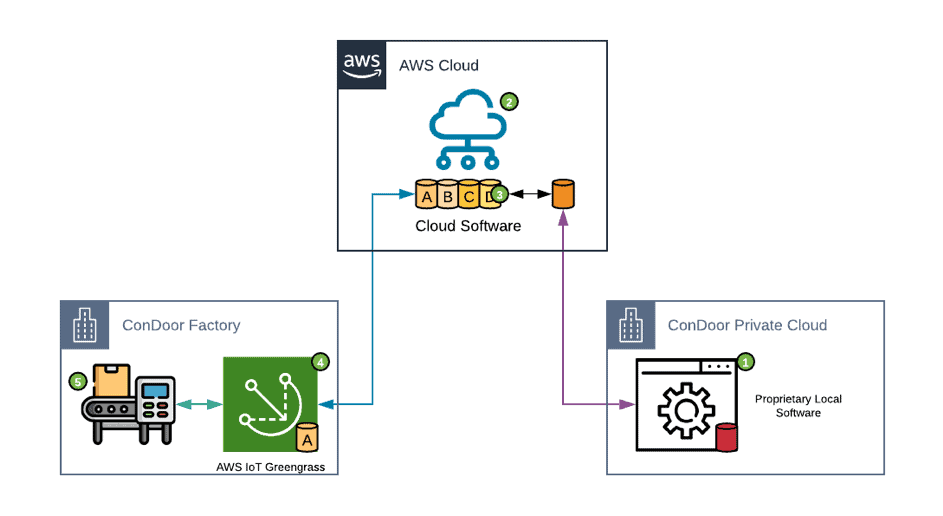 The complexity of relationships between these building blocks is depicted in the diagram below. 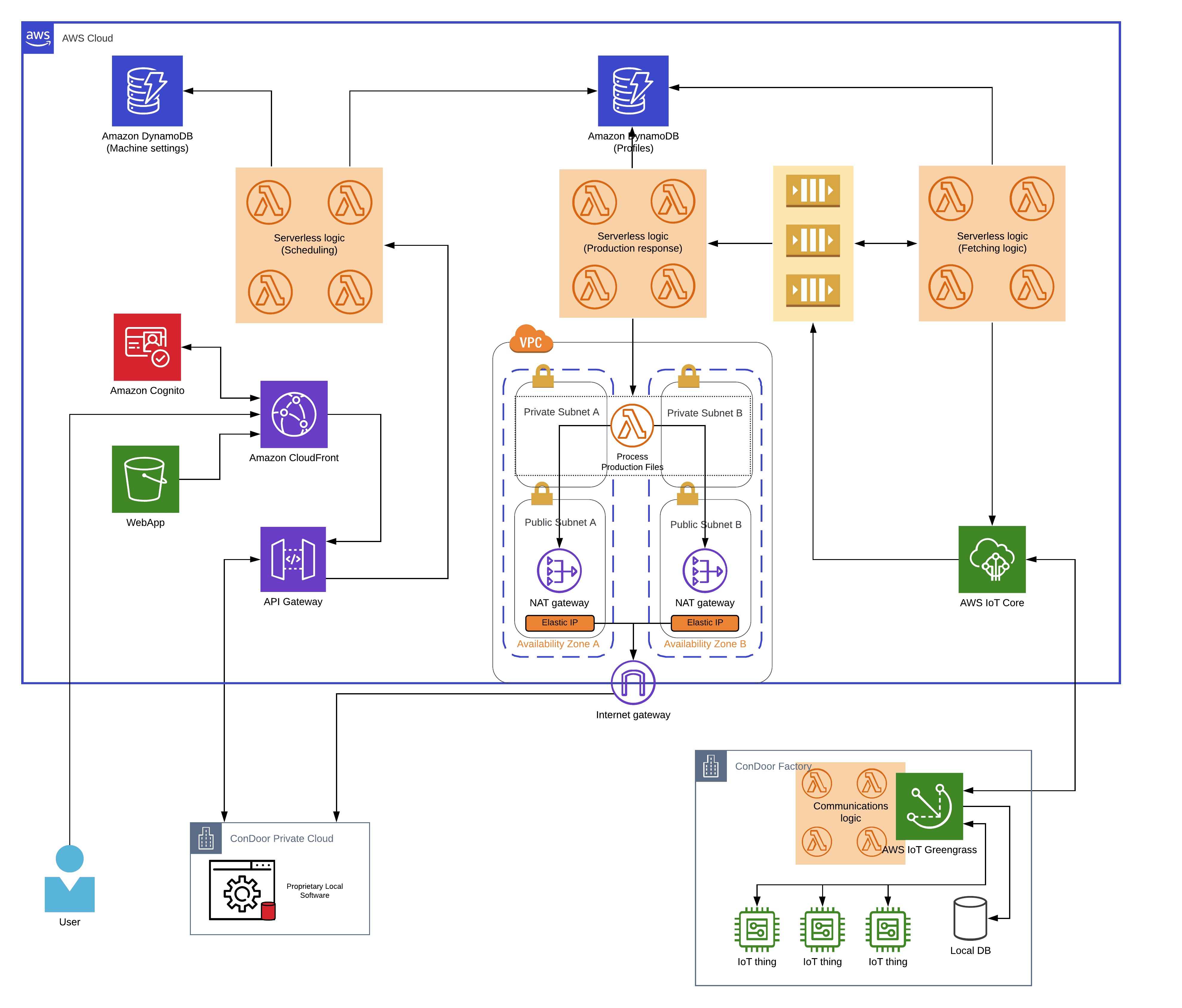 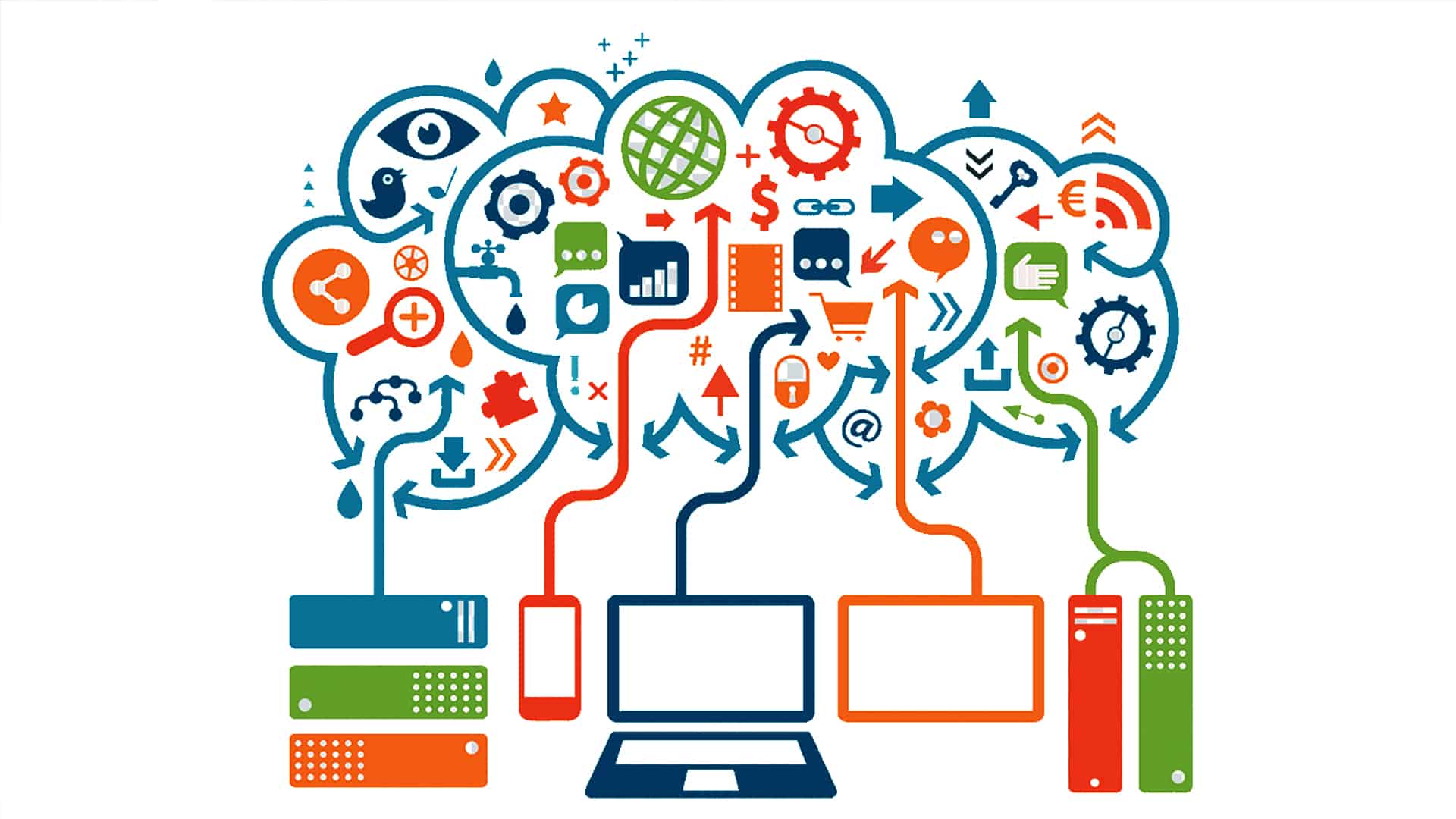 Synadia handled this challenge very well, our new profile machines are smart, integrated into our software and, as a result, do not require us to print orders anymore thereby contributing to a better environment.

The new solution runs in AWS cloud and plays an intermediary role between ConDoor private cloud and manufacturing factory in Emmen. Having used integrated with GitHub AWS CodePipeline in combination with AWS CloudFormation, Synadia was able to utilize the Infrastructure as Code (IaC) approach to provide fully automated deployments using DevOps method. The solution provided resolves all the challenges listed above.

As a result, it is way easier to operate profile machines now, no need to manually enter job order parameters, decide what job to schedule or report on the production status and manufacturing issues. ConDoor established full control and achieved an unprecedented level of transparency in the profile manufacturing process.

Factory workers need less time to operate the machine, as a result, the overall efficiency of the production line has improved since workers can perform other work activities in the freed up time.

The most important result of this project is that it managed to gain ConDoor’s further trust in AWS cloud solutions. It illustrated how easy AWS building blocks can help with automation and integration, which, in their turn, simplify the manufacturing process making its outputs more performant.

In other words, success in this endeavour made ConDoor ready for the next step.

Synadia eliminated all existing challenges thereby bringing us to a higher maturity level  without the need to expand compute capacity in our private cloud.

Errors caused by incorrectly configured work orders were eliminated due to the human factor removed from the manufacturing process. There is no need to manually schedule, print and report back due to profile machine being integrated with the core factory software.

Because everything is automated there is no need to manually oversee the manufacturing process. Monitoring dashboard displays the current state of the job order in real-time. Now everybody knows where the bottleneck is.

Due to serverless building blocks used, operational costs for the whole solution just equal to costs spent for an average FTE for a day in the Netherlands, whereas, in return the solution boosts the efficiency of the manufacturing process to an incomparable level.

ConDoor did not have to heavily invest in local hardware and provision for further growth. The solution had no impact on the ConDoor’s existing private cloud.

Despite utilizing the AWS cloud, ConDoor is able to benefit from our solution while not being connected to the internet for up to one week.

The solution is very simple and does not require any special knowledge or training. By a simple click factory workers are able to start the production process.

Discover the next steps

This project is just an intermediate step to achieve quick wins for ConDoor and Synadia. In the current situation there is still a lot of paper used in the form of part lists, instructions and checklists. Planning for many departments is still a manual process that results in unneeded mistakes, extra un-efficient work and costs, supply chain procedures are not fully integrated and this introduces a lot of redundant efforts and inefficiencies.

In the next project Synadia will evaluate the efficiency of other manufacturing processes and will enhance them to the max by removing the need to print in general and perform manual activities.

This is how Synadia sees ConDoor in the nearest future: “All tasks in every process are well organized, sequenced and controlled. “Stacks of paper” and “manual checklists” are history. The planning department and people on the floor work in harmony. Workflows are transparent and can be tracked in real-time on monitoring screens. ConDoor has become a “green” company that reduced the carbon footprint.”

Synadia is ACE eligible Select Consulting Partner founded in 2016 with a strong focus on serverless, IoT and industrial cloud solutions. Synadia is a young, ambitious and innovative company which firmly believes nothing is impossible.

The Synadia explorers use innovation to create new opportunities. To allow things to happen which their clients never thought possible before. Synadia’s ambition is to get advanced partner status next year. Synadia practices DevOps and Continuous Delivery in every project they do.

Synadia is Amazon Consulting Parter. Our certified team helps you to take full advantage of the business benefits in the cloud. 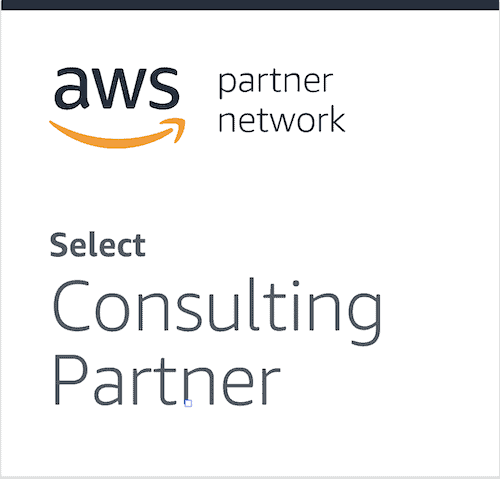 Page load link
Do you want an optimal website? Then we need some cookies from you. Ok
Go to Top